Law of Ukraine «about local government in Ukraine», adopted by the Verkhovna Rada of Ukraine, 1997, determined that the local community is the residents, permanent accommodation within villages, towns, cities, which is independent of the administrative-territorial units, or a voluntary association of residents of several villages that have a single administrative center. In addition, in accordance with theand art. 1 of this law the right to voluntary association had only rural communities: neither his nor the urban communities of such rights granted. That is communities in Ukraine have legal grounds to unite in one community is enough. Meanwhile, the actual mechanism of the process of unification of the territorial communities at the time so was developed and was not. On the one hand, rural communities have the right to Association, on the other hand, there are many outstanding issues of this merger: how it is done, how to comply with the principle of voluntary associations, the CAname to identify it on localreferendums, where to get funds for its conduct in the face of a significant shortage of rural budgets and their limitations, etc.

The relevance of the article actually, due to the analysis of the applicable legal principles the formation of the sustainable communities in conditions of reforming public administration. In this context, it should be understood that the development of local self-government in Ukraine is, above all, economic factors, lack of sufficient material and financial resources for the implementation for the tasks and functions of local government. Besides nemalovaz well role play also factors of a political, legal and psychological nature. This and the lack of a real subject of local self­government - the period of the local (territorial) Grau Madi, which owned would have the necessary material and financial resources would be the proper internal sources of formation of the revenues of local budgets, as well as insufficient legal resume drawing considerable array on organization and functioning of local government.

The article is devoted to researchorganizational and legal principles of the reform of territorial communities in Ukraine. The article examines the main normative- legal acts, which are designed to promote the formation of capable communities, identifying the problematic issues of the process of unification of communities and the development of proposals to reduce their negative impact on the process of decentralization. 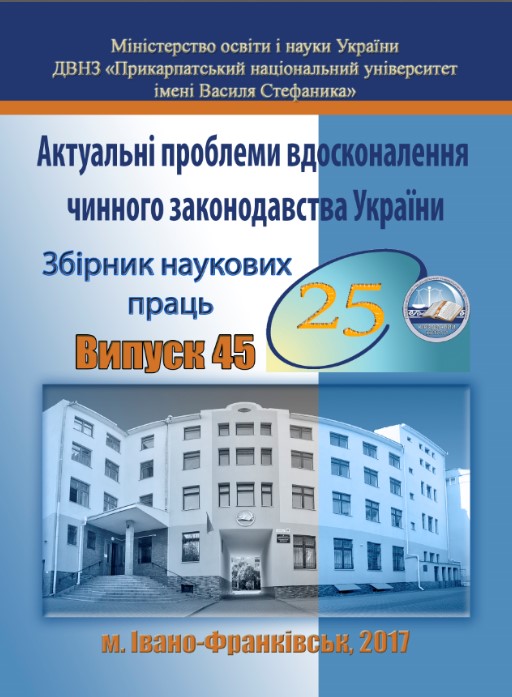